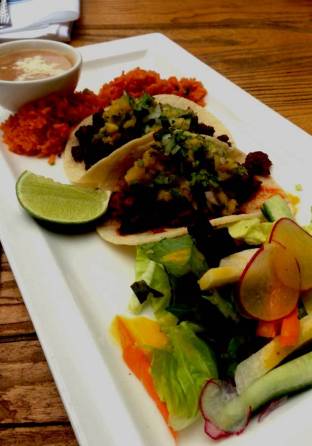 A few months ago, my husband and I went to a favorite Japanese restaurant. The former owner – a dear friend – had recently retired so as to travel and work on his golf game. Since we had always enjoyed the food, the service and the ambience, we decided to check out how his successor was doing and have a mid-week lunch date. Although the server took our drink order immediately, it was sometime later before she returned to ask if we’d like some food to go with it. My own order arrived in a timely fashion and we both assumed my husband’s would be out next. Nearly 10 minutes passed. When she finally strolled by to ask how everything was, we asked about the still-missing order. With a shrug, she said she’d go check on it. Upon her return, she immediately threw the chef under the bus with the explanation that “He screwed up because we’re really busy” (which, rather obviously, they weren’t). When the order finally arrived – and after a long enough passage to suggest it had never gone in to begin with – it wasn’t even correct. All this time, the manager had made several strolls through the dining room; although he would likely have seen and heard what was going on, he never stepped up to remedy the problem. Suffice it to say, we won’t be going back.

We contrast this to quite a different experience we had this past weekend at Cielito, a delightful Mexican restaurant in downtown Santa Barbara (California). Not only was our server pleasant and attentive but over the course of our lunch we were checked in on by four other servers, both of the young hostesses and the eatery’s new owner – each of them genuinely interested in how we were enjoying our meal and whether there was anything else they could get us. In a nutshell, not only did every employee “own” that table but also clearly owned Cielito’s reputation as a “go-to” place for an enjoyable experience. Whenever future getaways include a trip to Santa Barbara, there’s no question where we’ll be headed for lunch.

So how does this correlate to your own business? If you’ve ever dealt with a snarky receptionist, a put-upon sales clerk, or a customer service rep who’s clearly in the wrong career, it impacts your impression of the entire organization and makes you disinclined to remain a customer. On the flip side, how many times has a store employee walked you to the correct aisle to find a particular item, wished you a great day or – if you’re a regular –addressed you by name?

Couple the interpersonal equation with the dismaying reality that despite the fact we’re living in a technologically rich wonderland where we can nimbly text someone 8,000 miles away, participate in chat rooms with total strangers, and share Instagram photos across a broad swath of social media channels, we have become increasingly starved for real-time face-time with fellow human beings. Such insularity subsequently breeds a mindset of spinning in a solo orbit – a potentially damaging scenario if what you project in the workaday world reflects poorly on the entity that employs you.

If we choose to define “communication” as 140 characters, emojis, and hashtags, we’re purposely choosing emptiness over the chance to connect on a deeper level, to empathize, and to not only let others know we have actually noticed their presence but that such presence has made a difference – even briefly – in our lives. It is a table ownership in which both sets of participants must be fully engaged in order for the experience to be memorable.

Search by Topic or Author